New regulations to protect wetlands were introduced in the National Environmental Standards for Freshwater 2020 (NES-F) as part of the Government’s Essential Freshwater reforms.

For decades, protecting wetlands’ water quality and biodiversity values has been a priority for the Council and we have worked with Taranaki landowners to protect and enhance the region’s precious wetlands through our riparian and biodiversity programmes.

Wetlands – swamps, marshes, bogs and the like – are the meeting ground of land and freshwater. Those in Taranaki support a diverse array of plants and animals, some of them rare and threatened.

As well as being important for biodiversity, wetlands act as the ‘kidneys of the land’ and bring land management benefits. They store water during rainfall, helping to reduce flood levels. In dry periods, they release water to help maintain farm supplies.

The new rules: what you need to know

The NES-F came into force on 3 September 2020, setting out the consent pathways for certain activities in and around wetlands.

Since the regulations were announced, concerns were raised by Councils and sector groups about their workability. The Ministry for the Environment (MfE) sought views in 2021 on proposals to amend the definition of a ‘natural wetland’, consent pathways for additional sectors (eg quarries) and refinements to the restoration polices, recognition of maintenance and biosecurity activities.

The result of this was a report(external link) by MfE on the 262 individual submissions, including a submission from the Council. The recommendations include an amendment to the definition of a natural wetland to exclude any area that has ground cover comprising more than 50% exotic pasture species as identified in the National List of Exotic Pasture Species.

The MfE has now drafted changes to the NES-F and the National Policy Statement for Freshwater Management. The proposed changes are much more workable than the original proposals and the Council has sent another submission on the proposals as we continue to advocate for our region to ensure we are protecting our environment through robust but workable regulations. The updated regulations are set to go into effect by the end of 2022.

In the meantime, the strict regulations in the NES-F regarding what you can do in or near natural wetlands continue to apply. This includes:

If you wish to undertake any activities in or near a wetland we recommend you first contact the Council for advice.

Got a wetland on your property?

Contact our Land Management Officers about the best way to take care of it. Call the Council on 0800 736 222 or email info@trc.govt.nz

Lost wetlands but progress being made

As the map illustrates, Taranaki has lost most of its original wetlands, most notably on the ring plain. 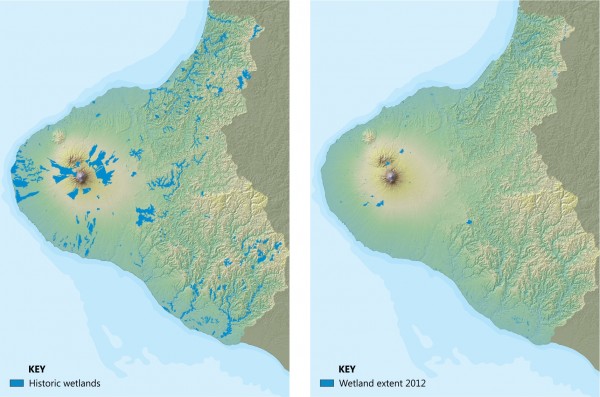 Mapping in 2012 revealed that Taranaki has only 8.1% of its original wetlands (note that the mapping process did not pick up wetlands that still exist in Egmont National Park). Nationwide, an estimated 10.1% of original wetlands remain and the figure for the North Island is less than 5%. Click on map for large version.

However, losses have slowed in recent years as the community has responded to Council encouragement, advice and assistance, as well as rules in its Regional Freshwater Plan for Taranaki (currently under review). From 2001 to 2007, an estimated 121ha of wetland was lost, but from 2007 to 2012, only 42ha or 1.3% of the total was lost. This amounts to a 60% reduction in the annual rate of loss.

The condition of the remaining wetlands is also improving, particularly those where the Council and the landowner have developed a biodiversity plan under the Key Native Ecosystem programme.

Out of the 40 wetlands assessed by the Council between 2010 and 2012, 76% were in good condition or better. Of those, 20% were considered to be in excellent or very good condition.

Reassessment of the 40 wetlands assessed between 2010 and 2012 show an improvement in 72% that have a Council biodiversity plan, and 31% of those without a plan.

The main improvements in sites with biodiversity plans were in the dominance and condition of native vegetation in and around the wetland – the result of improved fencing and weed and pest control.

The Council is also working with holders of riparian management plans to ensure that wetlands are encompassed in the fencing and planting of streambanks on the ring plain.