Some of South Taranaki’s Southlink bus services will change next month but coverage will remain the same. 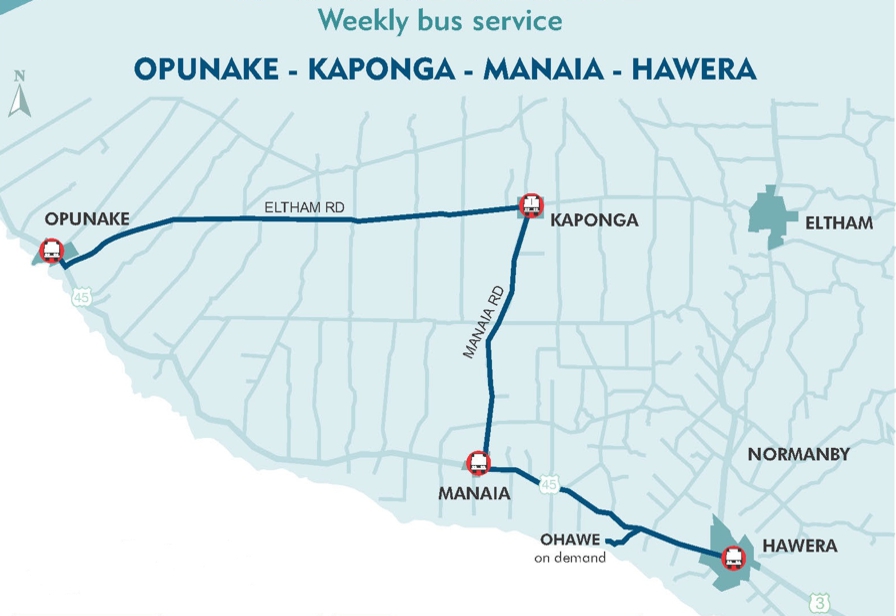 The route to be taken by the new Southlink service starting on 6 December.

“The key point for these townships is that from early December onwards, their weekly bus service to Hāwera will run on Thursdays instead of Tuesdays or Fridays,” says Chris Clarke, Transport Services Manager for the Taranaki Regional Council, which provides the services through contracted operators.

Current weekly Southlink services from Waverley and Pātea to Hāwera (Thursdays), and from Opunake to New Plymouth (Fridays) remain unchanged.

The new Opunake route does not incorporate Eltham or Normanby, which are now served by the Hāwera-New Plymouth Connector with four return services each weekday.

The new route will be operated by Pickering Motors, taking over from Weir Bros who operated the two services being replaced.

“We appreciate the service and professionalism provided by Weir Bros,” says Chris. “The only reason for changing the operator is that Pickerings are based in Opunake, so we can achieve greater financial and environmental efficiencies on behalf of ratepayers.”

Weir Bros will continue to operate the Waverley-Hāwera services on Fridays.

The new route arrangements will apply from the first week in December. Timetables and route maps will be available on buses before and following the change, and online at www.taranakibus.info(external link). For news and updates on bus services across the region, follow Taranaki Public Transport on Facebook(external link).