With its unique geography and an economy firmly anchored in the region's natural and physical resources, Taranaki is known for the can-do attitude of its people and their strong sense of regional pride. 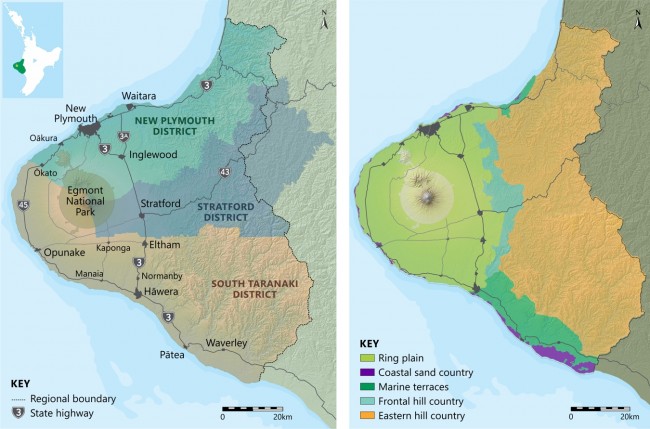 The Taranaki region has several units of local government (left) and a variety of landforms (right). Click on maps for big versions.

The Taranaki region covers a land area of 723,610 hectares, reaching as far north as the Mohakatino catchment, south to include the Waitotara catchment and inland to the boundary of, but not including, the Whanganui catchment. The region extends 12 nautical miles offshore to include the waters of the territorial sea. 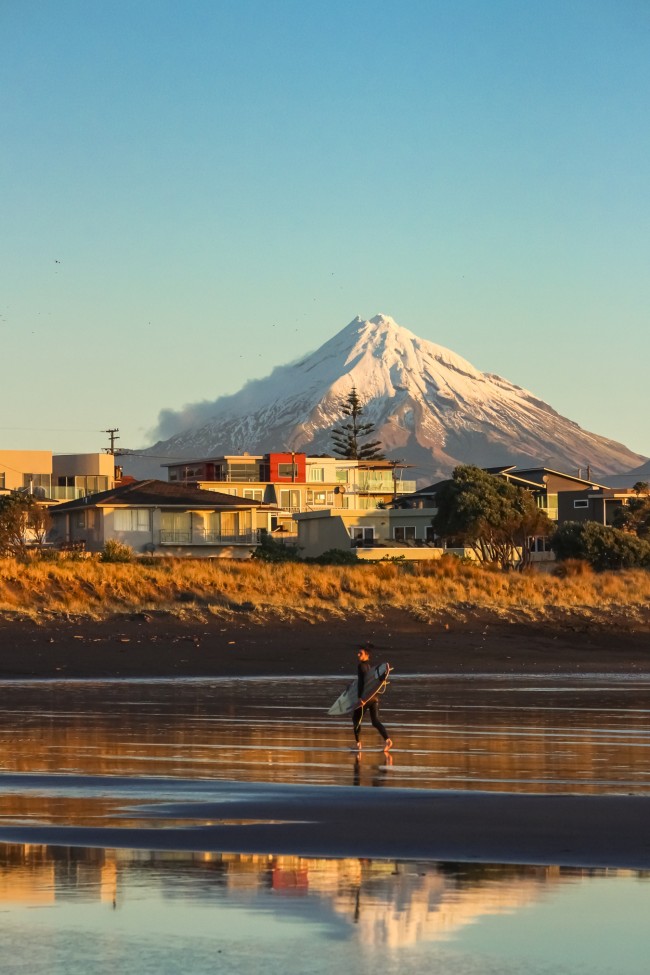 Taranaki can offer residents and visitors the opportunity to surf and ski on the same day.

Taranaki consists of four distinctive landforms, each of which requires a different type of environmental management.

The Taranaki ring plain, centred on Mount Taranaki, consists of fertile and free-draining volcanic soils. The ring plain supports intensive pastoral farming, particularly dairying that is most intensive on the flatter land in southern Taranaki. A large number of rivers and streams, which radiate from Mount Taranaki, are extensively used by the agricultural sector, for community water supplies and for a wide range of recreational purposes.

To the east of the ring plain lies the Taranaki hill country, comprising siltstones, sandstones and mudstones, known locally as papa. The topography of the hill country is steeply dissected and is prone to soil erosion and slipping, but can support both pastoral farming and commercial forestry when managed in accordance with the physical limitations of the land.

The coastal terraces along the north and south Taranaki coast make up the third major landform feature of the region. The soils of these areas are among the most versatile and productive in the region but the combination of light, sandy soils and strong winds in some areas can lead to localised wind erosion.

The Taranaki coastal environment is the fourth of the major landforms. The region is exposed to the west and as a consequence, high-energy wave and wind conditions dominate the coastal environment. There are few areas of sheltered water beyond the major estuaries such as the Tongaporutu, Waitara and Patea rivers, and the confines of Port Taranaki.

The Taranaki region has a temperate climate with generally abundant rainfall. The incised nature of ring plain streams means that flooding is not a major problem. However, occasional intense rainfall events can lead to rapid rises in river levels and flooding in hill country valleys and elsewhere.

Figures from the 2018 census show the total population of Taranaki stands at 117,561, an increase of 7.3% over the 2013 census figure. Taranaki’s population accounts for 2.5% of New Zealand’s total population.

Population changes have also varied within the region. The most notable feature has been the continued growth in the proportion of the population residing in the New Plymouth district, which contains 68.6% of the region’s population – up from 67.7% in 2013. Both Stratford and South Taranaki districts have also experienced population increases since 2013.

The general trend has been for a decrease in the population of smaller rural towns and an increased concentration of population in north Taranaki and the main centres.

The Taranaki population is both older and younger than the national average, with a higher proportion of children under 15 years and adults over 65 years of age. This may be in part due to lifestyle factors, as Taranaki is seen as an attractive and desirable area for family living with good facilities and affordable housing.

The percentage of Māori within the region continues now stands at 17.5%, an increase from 16.6% at the 2013 census. There are eight recognised iwi within Taranaki: Ngāti Tama, Ngāti Mutunga, Ngāti Maru, Te Atiawa, Taranaki, Ngāruahine, Ngāti Ruanui and Ngaa Rauru. 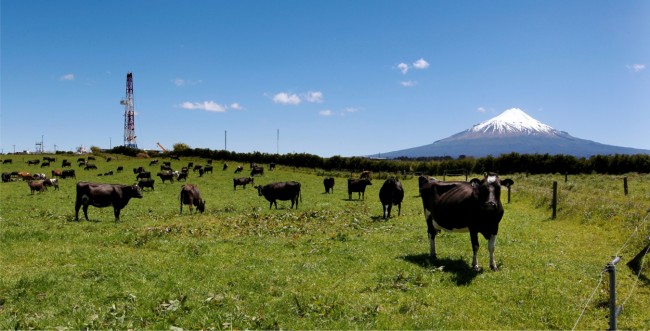 Dairying and hydrocarbon exploration & production are both important to the Taranaki economy.

A notable feature of the Taranaki region is its reliance on the region’s natural and physical resources for its social and economic wellbeing.

Farming and other land-based activities continue to play a prominent role in employment.

Over 16% of the labour force is employed in agriculture and fisheries, compared with 8.3% nationally. Dairying dominates farming in Taranaki, particularly on the ring plain. There are approximately 1,620 dairy herds and about 477,300 dairy cows are being milked, 10% of New Zealand’s milking herd. Dairying accounts for 10.7% of regional employment including on-farm workers and those engaged in processing and wholesaling.

Sheep and beef farming are concentrated in the hill country and also play an important part in the regional economy.

The oil and gas industry is a major contributor to the regional economy.  The Taranaki Basin is currently New Zealand’s only hydrocarbon producing area, with the Kapuni and the offshore Maui fields making up the major part of New Zealand’s natural gas resources.  Extensive drilling programmes have continued in an effort to support the Kapuni and Maui fields.  These have resulted in a number of significant additional fields being discovered in the last 10 to 15 years.  The Mangahewa onshore gas and condensate field was discovered in 1997, the Maari offshore field in 1998 and the Rimu onshore field in South Taranaki in 1999. The nearby Kauri field was discovered in 2001. The Pohokura offshore gas field in North Taranaki, the largest gas and condensate find in 30 years, was discovered in 2000 and brought into production in 2006.  The offshore Tui well was discovered in 2003 and brought on-stream in 2008.  Production from the offshore Kupe field, first discovered in 1986, commenced during 2010.

The presence of oil and gas in the region has given rise to industries involved in the processing, distribution, use and export of hydrocarbons. Production stations or gas treatment plants are found at Oaonui, Kapuni, Waihapa, Rimu, Kaimiro and the McKee oil and gas field. An ammonia urea plant is located at Kapuni, UF resin plant at Waitara and gas-fired power stations at Stratford and McKee, while methanol production occurs at Motunui and Waitara Valley.

Tourism is playing an increasingly important role in the Taranaki economy, with approximately 625,623 guest nights spent in the Taranaki region by domestic and international visitors per annum.  Most visitors are from other North island regions.  Some 97,342 guest nights were from international visitors – an increase of 26.5% over the previous 12 months.  The region’s mountain, forests, gardens and parks are attracting increasing numbers of visitors for rural-based and outdoor recreation activities.  The Taranaki region is also becoming increasingly popular and recognised for a range of organised cultural, sporting and other events.

As an export-based economy, major changes in the world economy or commodity prices can significantly affect Taranaki. The regional economy is therefore more vulnerable to changes in overseas markets and price fluctuations for our land-based products than larger urban-dominated regions.

The use and quality of water is the major resource management issue in the region. Water is a vital resource for agriculture, recreation and industry and has profound cultural and spiritual importance to the community.

While overall water quality in the region is very good, particularly in the upper catchments, there is some deterioration in the lower reaches of rivers as a result of intensive agricultural land use.

Dairying will continue to play a prominent role in the regional economy and this will place ongoing pressures on our water resources from farm run-off, sediment and nutrients. Increased efforts will be needed just to maintain current water quality and to improve quality where deterioration has occurred. Attention must continue to be given to promoting good land and riparian management practices.

Management of the many industrial, municipal and agricultural waste discharges from individual point sources has improved significantly over the years. These discharges are closely monitored. It is vital for Taranaki’s future that all such discharges are managed sustainably. Where there are gaps in our knowledge of the resources of the region or the environmental effects of their use, necessary investigations and research must be undertaken to improve our understanding.

Other significant environmental issues facing the Taranaki region include:

The tangata whenua, through the region’s eight iwi: (Ngāti Tama, Ngāti Mutunga, Ngāti Maru, Te Atiawa, Taranaki, Ngāruahine, Ngāti Ruanui and Ngaa Rauru) have a special relationship with the regions natural and physical resources.  Inherent in this relationship is kaitiakitanga which seeks to maintain the mauri of these resources, while allowing the ability to use and develop them for social, cultural and economic well-being. Iwi either individually or as a collective wish to maintain meaningful and adequate input to decision-making and to have effective and efficient structures and processes in place to enable that to occur.

State of the Environment Report

Towards a Predator-Free Taranaki