Why we're working Towards a Predator-Free Taranaki, and how you can help; how fencing and planting streambanks is paying dividends for the region; and how our gardens are also classrooms..

Be part of the predator-free drive

Taranaki Taku Tūranga - Our Place, Towards a Predator-Free Taranaki

Kia ora tātou katoa, greetings to you all. Taranaki is facing one of its biggest challenges - to become the first predator-free region in the country.

And I believe we can do it - but only if everyone in the region plays their part.

Taranaki Taku Tūranga - Our Place, Towards a Predator-Free Taranaki is starting from a solid foundation, thanks to all the work by farmers in the Council's Self-Help Possum Control Scheme and thanks to the iconic, well-supported and inspirational conservation programmes on the Mounga and all around the region.

But now we need to lift this work to the next level and enlist the whole region in the campaign to reach the ultimate goal.

Rats, mustelids (ferrets, weasels, stoats) and possums kill millions of native birds, lizards and invertebrates every year, pushing many species to the brink of extinction. And possums and ferrets, in particular, carry animal diseases which threaten our economically vital agricultural sector.

So ridding the region of these predators is as much an opportunity as it is a challenge.

It will be taking Taranaki forward - but its ultimate success is in the hands of you, the people of the region.

We’ll be reaching out to schools, community groups, farmers and residents in different areas in the coming months as we enter new phases of the project.

I've been pleased to see an enthusiastic response since the launch of Towards a Predator-Free Taranaki a couple of weeks ago. So come on, join the campaign. Check out the video for an outline of the project, and head to www.trc.govt.nz/pf-taranaki2050 to see how and where you can play your part.

Be a part of it as once again, Taranaki blazes a trail for the rest of the country to follow. And imagine how proud you'd feel if you could tell your grandchildren that you were part of making Taranaki predator-free!

Investing in the future

A new scientific study of data from Taranaki has concluded that the region has been taking effective steps to improve the health of its rivers and streams.

The independent study by NIWA found that Taranaki Regional Council’s long-running riparian (streamside) protection programme is not only strongly associated with improved ecological health in the region’s waterways, but has also reduced E. coli levels.

Guided by solid previous research, improving the ecological health of streams has been the major goal of the Council’s long-running and voluntary riparian fencing and planting programme. The NIWA report endorses and validates this approach, with reduced bacterial (E. coli) contamination being an additional benefit.

The report notes that because the Council’s riparian programme has been running so long and at such a scale, it provides a rare opportunity for leading-edge research available nowhere else in the world.

A notable finding is that ecological health is improving even where nitrogen levels are increasing, suggesting that the relationship between nutrient levels and stream health is not as simplistic and straightforward as often suggested. The study also raises questions about New Zealand’s new swimmability regime.

According to NIWA’s assessment, Taranaki’s rivers and streams are well above minimum European standards for recreational water quality, but they do not meet this country’s new ‘swimmability’ criteria.

Teachers and children from Kaponga School had a whale of a time at Hollard Gardens recently when the Council's gardeners and Education Officer taught them all about composting, and how to identify creepy crawlies.

All three of the Council's iconic heritage properties - Pukeiti and Tūpare as well as Hollard Gardens - can double as outdoor classrooms. The Council has developed educational activities tailored to the unique history and environment of each. The Pukeiti Rainforest School, Tūpare Riverside School and Hollard Gardens Woodlands School offer nine to 16 activities ranging from guided walks to animal, bird and river studies in stimulating and natural environments.

Schools typically spend a day at the venue, and as you can see from the big smile in this photo, the excursions are enjoyed by the children, as well as teachers and parents. But schools need to book months in advance! See our garden schools web page for details.

And of course, there’s always something for grown-ups. The gardens are worth a visit at any time of the year, and are also the venues for regular free workshops and other public events. Check out our gardens web pages and our events calender.

Around & about the region 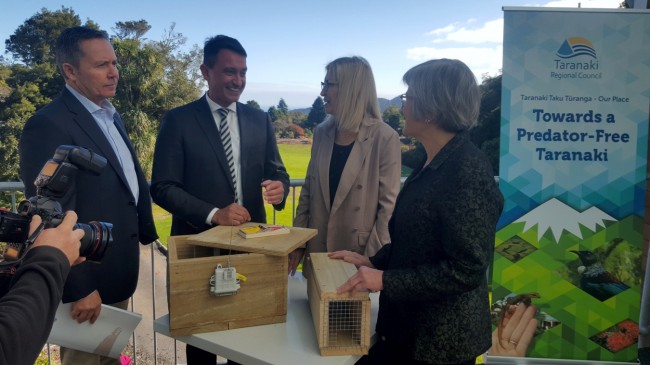 All eyes were on Pukeiti where Conservation Minister Hon Eugenie Sage announced that Towards a Predator-Free Taranaki would get $11.7 million in support from Predator-Free 2050 Ltd, a Crown company. Local body leaders, iwi and other stakeholders were on hand for the announcement, which was covered by national news crews. Here the Minister, right, is pictured with Taranaki Regional Council Chairman David MacLeod, centre, and Predator-Free 2050 Ltd's Jane Taylor and Ed Chignell.

The Taranaki Regional Council has formally adopted its Long-Term Plan for 2018/2028, taking a business-as-planned approach to all of its activities but also aiming to lift two key programmes to new levels of achievement. In biodiversity protection it aims to give Taranaki a leadership role in making a reality of New Zealand’s aspiration to be predator-free by 2050. In recreation and culture, it aims to build on recent exciting developments to further cement Pukeiti’s status as a visitor destination with wide international appeal. The rating impact amounts to just cents per week for most residential ratepayers in the region.