Wider use envisaged for 'Yarrow Stadium Plus'

Yarrow Stadium will be remodelled to suit a broader range of regional and community sports while continuing to be the premier regional venue for top-level sport in the post-COVID era.

The East Stand will be replaced under a revised project whose Master Plan was revealed today by the venue’s owner, the Taranaki Regional Council.

“It’s Yarrow Stadium Plus,” says the Council Chair, David MacLeod. “We’re going for a venue that’s fit for a wider range of users and scale of uses.
“The rebuilt main stand will provide amenities for outer fields as well as the main field. It will also have flexible and scalable seating capacity so it can cater for events and fixtures at all levels. The aim is for the venue’s total seating capacity for top-level events to at least equal what previously existed.”

The venue’s flexibility will benefit all users, he says. And facilities in the new East Stand, including public toilets, changing rooms, showers and food and beverage areas, will be available to users of the outer fields without the need to open up the entire stand or the rest of the Stadium.

“We’re keen to build on the variety of users at the venue. For example, I’ve been pleased to see that the biggest user of the main pitch this year has been soccer. We want them to keep using it. And wouldn’t it be great to get FIFA fixtures back at some point in the future?”

Mr MacLeod says simply repairing the existing East Stand would have involved too many uncertainties in terms of cost and outcome.

“We’ve taken a long, hard look at the engineering requirements, risks and estimated costs of repairing the stand,” he says. “Rebuilding it from scratch offers far greater certainty in terms of cost and outcome. It also means we’ve been able to hone the project to ensure the venue meets future needs in a post-COVID world.”

He says the redeveloped Stadium will nicely complement the range of existing and planned sporting and community venues in New Plymouth and the wider region.

“A joint group at governance level has been set up to keep an eye on the Stadium project, the Pukekura Raceway proposal and developments at Pukekura Park, to ensure they will all complement each other.”

Building a new East Stand also means the needs of the venue’s sports users can now be accommodated under one roof. This avoids the need for a stand-alone training centre incorporating community facilities and amenities, as originally planned.

Mr MacLeod says key stakeholders, including the Stadium’s operator, the New Plymouth District Council, as well as Sport Taranaki and the rugby union, have been fully consulted and he is confident they understand and support the TRC’s approach.

The vision for the Stadium has been amended to emphasise its broad usability. The first aim in the new vision statement is: “The best regional stadium in New Zealand that regularly hosts local, regional, national and international sporting and entertainment events.”

The project’s $50 million budget remains unchanged but Yarrow Stadium rates will reduce by 40%-plus from 1 July next year because the $20 million injection of ‘shovel-ready’ Government funding.

“It’s a great outcome for the region and it will be exciting to see contractors busy on the site by the end of the year,” says Mr MacLeod.

Physical works will begin this year on repairs to the West Stand, along with preparations for the refurbishment of the main pitch and installation of LED pitch lighting, and demolition of the East Stand. Work will also start on a design for the replacement East Stand.

Local contractors and sub-contractors will be used whenever possible throughout the project. Timeframes for reopening the venue will become clearer after tenders are let and work programmes finalised. “We’d love it if the West Stand repairs, main pitch refurbishment and new LED lighting were finished in time for the 2021 national domestic rugby competition, but that can’t be a firm promise at this stage,” says Mr MacLeod.

The Stadium’s grandstands were declared earthquake-prone in 2017 and 2018, and closed to the public. In 2019 the Council decided on a $50 million refurbishment and repair project. But the works programme was put on hold and reviewed during winter while the impacts of COVID-19 were analysed and factored in. 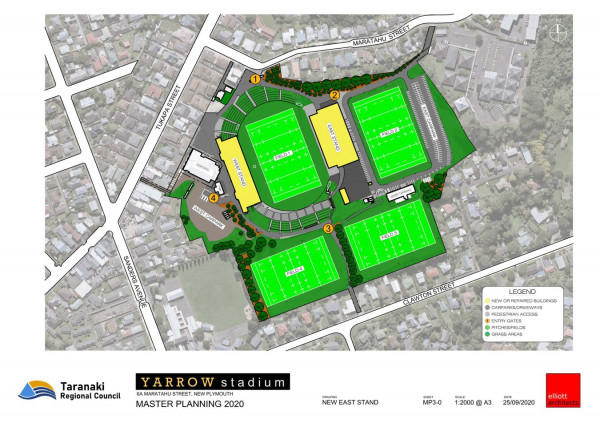 Yarrow Stadium is to get a new East Stand as part of changes announced today to the repair and refurbishment project.