In Oākura-Kaitake? Seen a possum? Report it online

Go to www.trc.govt.nz/possum and show us where you've heard or seen signs of a possum in Kaitake-Oākura, or call 0800 736 222. Watch the video to find out why:

Read more about the couple in the video

“We just love the native wildlife and plants here so much, we couldn’t think of a better place to be  – it’ll be the perfect honeymoon,” says Mr Hoegh, who’s admits to working a little on the zero-possum operation on his wedding day earlier this month.

Their work is part of a New Zealand-first, multi-faceted operation to reduce possums to zero density across about 8,600 hectares, on urban, farm and conservation land between the Timaru Stream and Oākura River, below Carrington road, to the coast.

The couple’s urban zero-possum work has been underway since October 2018, already catching almost 200 possums in Oākura, but they only returned to the beach side town today (Friday 25 January) after celebrating their wedding in Ireland, where the bride hails from. They’ve been working in the zero possum area, for Taranaki Regional Council, together with Oākura locals, community groups, Taranaki Mounga Project and Taranaki Regional Council, as part of Towards Predator-Free Taranaki.

However, the couple are calling on Oākura residents to help eradicate possums - reporting any suspected possums in the area to them 24/7 on 0800 736 222

“We can’t do this by ourselves.  We need residents’ eyes and ears to report any suspected possum sightings, sounds or signs of this predator,” Mrs Hoegh says.

The good-natured bride says she is happy to receive calls anytime 24/7 from the public to help get rid of possums.

The Kataike community, including Oākura and Ōkato, is embracing the Restore Kaitake work, helping make their patch safe for the return of treasured species such as kākā, yellow-crowned kākāriki and kiwi.

Find out how the community is embracing the multi-pronged work here: Restore Kaitake unites community of trappers

Get involved and get trapping 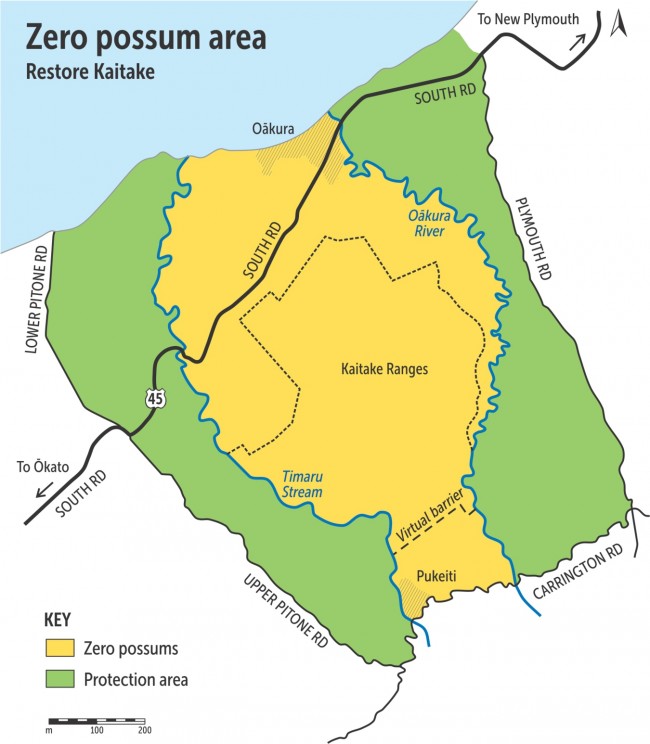 The areas covered by Restore Kaitake.

As part of Towards Predator-Free Taranaki, local residents and community groups are getting behind a multi-pronged effort to reduce predators from 8,600 hectares approximately, including Oakura, the Kaitake Range and farmland down to the coast. The project is helping to rejuvenate the area so native species can once again flourish.

The joint work to Restore Kaitake is a multi-pronged approach, involving local residents and groups, which are teaming up with Towards Predator-Free Taranaki, led by Taranaki Regional Council, and Taranaki Mounga Project(external link), a conservation project on Egmont National Park, to implement the work on urban, rural and conservation land.

The joint Restore Kaitake work includes a New Zealand-first trial to eradicate all possums from the Kaitake Range.

Never before in the country, has it been attempted to reduce possums to zero density on farm, urban and conservation land, over about 4,500 hectares of mixed-land use and varying habitat.

Approximately 2,500 hectares of this work is in Egmont National Park (Block C on map) and will be managed in conjunction with the Taranaki Mounga Project and the Department of Conservation.

It is part of a possum control operation that Taranaki Mounga project and Taranaki Regional Council will carry out across Egmont National Park in 2019. 1080 bait is the most effective tool to control predators in this rugged environment and will only be used on Egmont National Park and some adjacent privately-owned bush areas.

To learn further information and facts about 1080 and its use in New Zealand visit here(external link). This website is a joint initiative by Forest and Bird and Federated Farmers.

The learnings and techniques from the Restore Kaitake work will be shared, helping New Zealand and other regions get closer to the predator-free aspiration.

The latest technology and techniques will be used. This includes; motion sensor cameras on the Kaitake Range, to help understand predator behaviour; a virtual barrier including 1,300 wireless monitored traps; a trapping website and app, Trap.NZ(external link), where residents can view predator control in their neighbourhood and record their catches.

Possum control in the remaining areas of the treatment area (blocks A, B and D, E & F on attached map) will be managed by the Taranaki Regional Council.