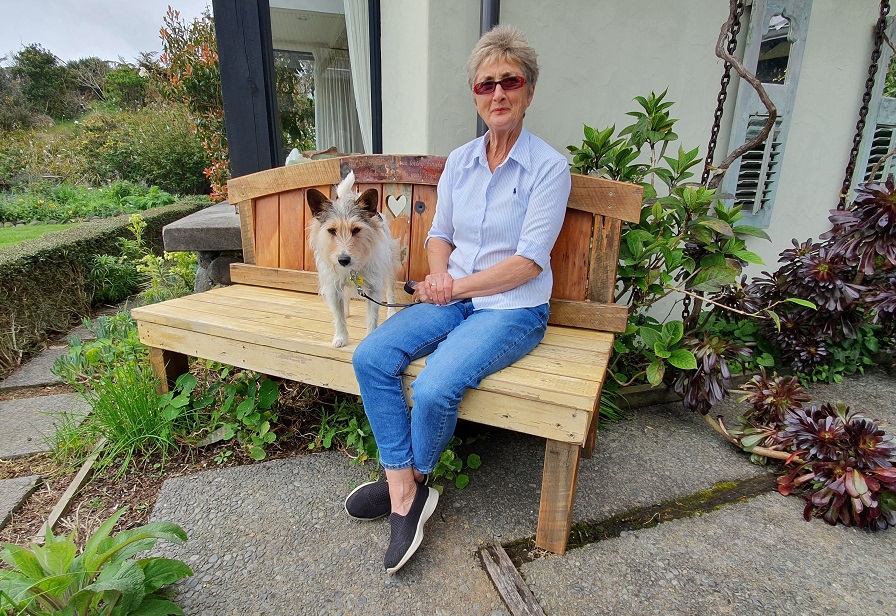 Chewy's unwavering effort in the fight against mustelids (rats, stoats, ferrets), as part of Towards Predator-Free Taranaki, saw him come face-to-face with a ferret. It viciously attacked Chewbacca, but eventually with the help of his long-time friend and master, Sally Masson of New Plymouth, they overcame the dark side of the force, killing the ferret and taking one step closer to making their environment predator-free.

"It was 9pm and Chewy was residing inside, but he was highly excited about something. I let him out and he cut across the lawn like a streak of lightning. Then there was a squealing which I'd never heard before in my life," says Sally, who sits on the memorial seat to her late husband Paull and recalls the story of Chewy's tussle with the ferret on their 4.05 hectare property on the outskirts of New Plymouth.

"Ferrets are vicious you know, and while Chewbacca was attacking it, the ferret was biting him back and so I ran up to the house and I picked up the first thing I could find, which was an electric fence standard with the pigtail loop on the top of it. I turned it upside down and hit the ferret three times," says Sally.

"Around ten minutes later Chewy returned without the ferret and came inside, but wow did he stink! Can you imagine, he absolutely stank, which I guess was due to his close contact with the ferret. I tied him up and let him sleep it off as he was exhausted. His wee little face had swollen up from the ferret bites so I washed his nose and could see all the bite marks. After a bit of home veterinary care the swelling went down and Chewy healed up nicely."

Sally is a keen advocate for conservation and along with her brother, Jeremy Thompson, they have recently placed a QEII covenant on 8.2 hectares of native bush on their family farm, across the road from Sally's place. Sally is currently in the process of placing a QEII covenant on a lake, a large old oak tree, and a pocket of native bush located on her property, which was all once farm land. Sally says that it was her grandparents Stella and Percy Webster's vision to preserve the land for their family and for the future. Their influence had been passed down through the generations, says Sally.

"The Taranaki Regional Council along with QEII, NZ Walkways, DOC and Wild For Taranaki (the region’s biodiversity trust) have been amazing in our conservation efforts. It’s helping us create a walkway connecting special parts of native bush spread across properties in the area, helping realise the dreams and aspirations we have for the land."