Oil and gas workers redirect careers to Towards Predator-Free Taranaki 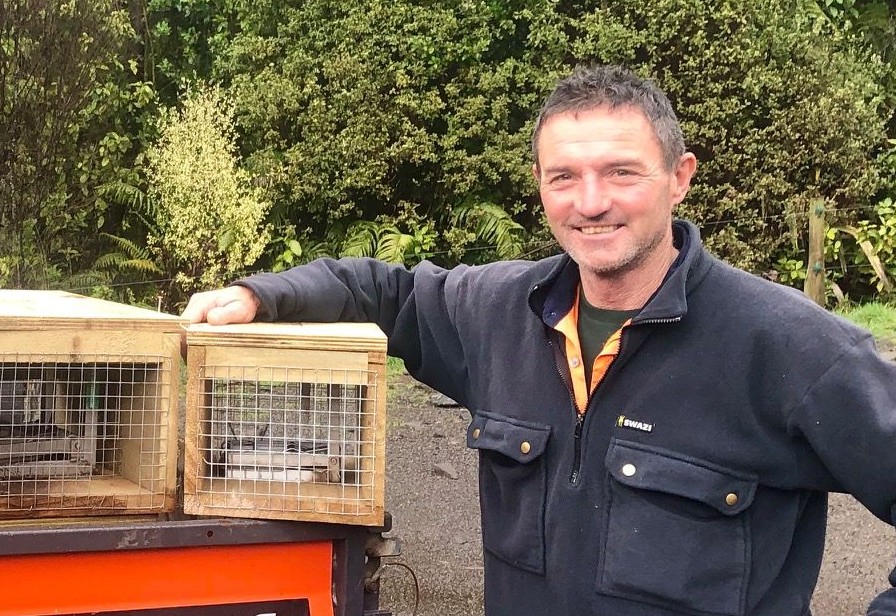 North Taranaki’s Mike Avey and Chris Halcombe are currently helping farmers in rural New Plymouth use new trapping technology to remove stoats, as part of a large-scale, rural trial, attempted for the first time in Taranaki.

Stoats are skilled killers, introduced by people in the 1880s, and travel large distances to eat baby birds and eggs. The rural trial, across 16,000 hectares between New Plymouth and Egmont National Park is part of Towards Predator-Free Taranaki, helping restore biodiversity by removing rats, possums and stoats from rural, urban and conservation land.

Chris and Mike started contracting to Towards Predator-Free Taranaki in December 2018, diversifying from work in seismic drilling for Taranaki’s oil and gas industry.

Less than a year into contract work, helping residents remove rats, possums and stoats to better care for native wildlife and plants, Chris and Mike say they are blown away by the positive public reaction in their new career paths.

“It was nice to get some positive feedback for the work we were doing, especially in Oakura, it was massive.

“People were literally stopping us in the street and thanking us. It was something I had never experienced before,” Chris says.

“It’s great contributing to something that’s making such a positive difference,” Mike says.

Chris, who farms in Urenui and Mike, who farms near Egmont National Park, say that although the work with Towards Predator-Free Taranaki and the oil industry are very different, both roles use many of the same skills and will have a big impact on Taranaki’s future.

“In both jobs we deal with so many land owners one-on-one, but now instead of drilling machinery we are using traps.

“It’s amazing the amount of people, who say we don’t have any predators at our place, but then we set the traps and it’s like hello, they’re there,” Mike says.

“Once we feed back the results to people, and they see the trap catches, they’re normally right on board,” Chris says.

How they deal with people is key to their predator control work with rural residents, the men say.

“With our background in seismic drilling, we understand that you have to treat landowners with respect, or you’re not going to get anywhere, so that’s really drummed into us,” Chris says.

For more information about the rural trial visit: https://www.trc.govt.nz/environment/working-together/pf-taranaki2050/towards-predator-free-taranaki-rural