Native species, such as kiwi and the North Island robin, are returning to Pukeiti for the first time in decades.

Native species, such as kiwi and the North Island robin, are returning to Pukeiti for the first time in decades.

The two species have recently returned to Pukeiti, Taranaki’s world-class gardens and rainforest after it’s been at the forefront of intensive predator control for the past year.

Kiwi footprints were found last month at Pukeiti - the first time in 20 years - indicating at least one kiwi has returned to the area. Further monitoring is underway to see if there are more kiwi in the area. 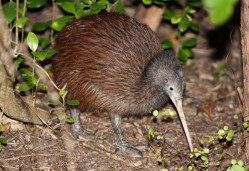 Further work is underway preparing for the re-release of Kiwi back to the Kaitake range and Pukeiti’s rainforest in early 2020 by Taranaki Mounga.

“We know that native wildlife like kiwi, are more likely to survive because of intensive predator control,” Mr Shanley says.

To support the return of native birds to the area it’s vital the Kaitake community reports any possums in the area on 0800 736 222 or online: https://bit.ly/36AvDaV(external link)

It’s also critical that all dogs must be kept out of Pukeiti and the Kaitake range to ensure it remains a safe haven for kiwi, Mr Shanley says.

"It’s exciting to see these kiwi footprints. It indicates intensive predator control is making this area more of a safe haven for kiwi and other native wildlife – this is what it’s about.

“The kiwi footprints appeared a few months after a North Island Robin was spotted earlier this year at Pukeiti, the first time the species had been in the area for at least 100 years. 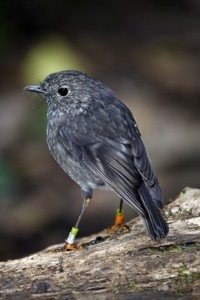 “We’re also seeing flocks of kereru visit Pukeiti too. These are all signs that removing rats, possums and stoats is working, but it’s vital we keep going,” Mr Shanley says.

Pukeiti is free to visit, open all day, every day. Head up and see how Pukeiti’s native wildlife and plants are thriving, following intensive predator control: www.pukeiti.nz